In 2016, Ishaq had a pipe dream. Quite literally: He was dreaming of pipes. Plastic pipes for construction. At the time he was assembling electric heaters, frequently delivering them to building sites. There he noticed that plastic pipes were in very short supply.

After running the numbers and locking in supply contracts to start on a solid footing, he founded ESRAR and soon had a production line up and running. Goodbye heaters, hello pipes.

By early 2018, Ishaq’s order books were full, with new customers knocking at the door. What at first seemed like great news soon cost him sleepless nights, however: To stay in business he had to increase output and expand his sales catalog. It meant setting up a second production line. In other words, taking up a loan.

I was too big for microfinance and too small for traditional banks. Thankfully, I was just right for Sanadcom’s tailored financing program.”

“We can’t help now, maybe later” became a familiar refrain at the banks he visited, and microfinance institutions weren’t interested, either. For the former, two years wasn’t enough of a track record, and for the latter, the loan amount was too large. It was March when a business acquaintance suggested Sanadcom. “It’s a financing company specialized in very small, small and medium enterprises. You’re a dynamic entrepreneur and your situation fits their profile.” 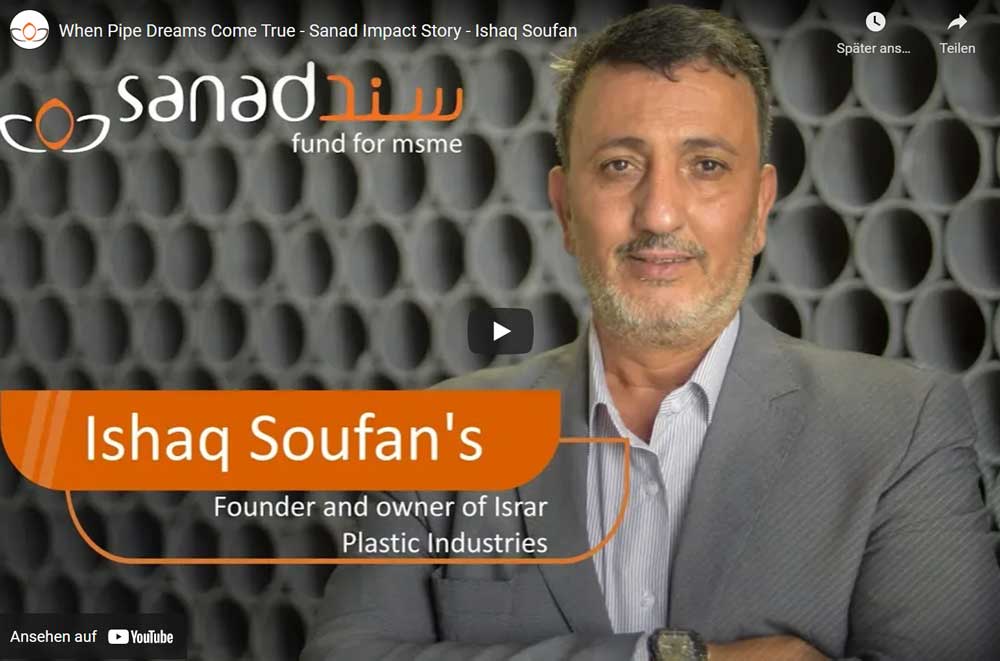 In fact, Sanadcom had became fully operational just three months prior in January, with Jordan’s Microfund for Women and Bahrain’s GMS Ventures and Investments as anchor investors, and additional equity funding and support from SANAD Fund for MSME and Women's World Banking Capital Partners.

“Sure enough, Sanadcom came through with funding for the second production line,” beams Ishaq, “and my advisor there also gave me valuable advice on administration and accounting. I couldn’t have a better partner.” The loan totaled JOD 70,000 (about USD 98,730) with a 3-year tenor. “We are now eight at ESRAR, and will soon be more.”