Mixing the right ingredients for success

Within a few seconds upon meeting Bara’a al-Thawra one is struck by the unique combination of focus, determination and contagious enthusiasm, and the strong sense that she will let nothing get in the way of achieving her goals.

Such as becoming financially independent by starting a business. It was in her third year at the Hashemite University, near her home town of Zarqa, that Bara’a saw her future in organic beauty products.

In 2013, shortly after graduating, she founded Tabeetna with just 20 dinars (a little under 30 US dollars). She prudently concentrated on soaps and lotions soaps at first. The ingredients for her formulas came from local farmers and the family kitchen was her laboratory. Rather than opening her own store, she sold her products through local shops and salons as well as social media.

“Financial independence was a bold dream. With the Microfund for Women it became a reality.”

Within three years, the Tabeetna brand had earned the trust of a growing clientele. Bara’a was a one-woman operation and she needed to scale up and hire staff to help with production. Banks wouldn’t loan her even the relatively modest sum she required, however.

“They all said it was too risky, and, unfortunately, gender still plays a role here.” Enter the Microfund for Women (MFW), the market leading microfinance institute in Jordan with a focus on gender lens investing, which the SANAD Fund for MSMEs began partnering with in 2015. 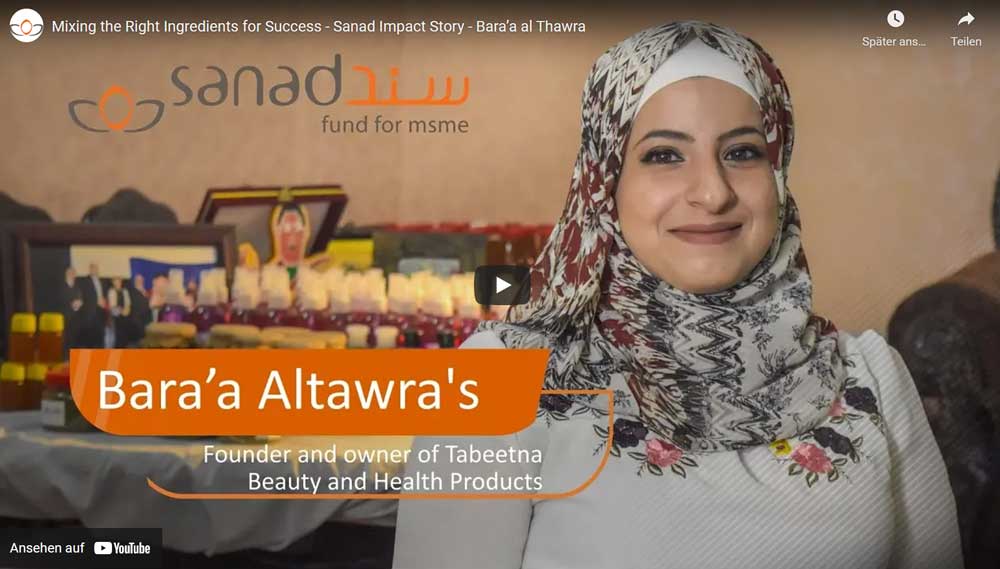 The first loan of JOD 1,000 (about USD 1,410) in 2017 was for high-quality ingredients. The second one in 2018 enabled Bara’a to hire staff. “Besides providing just the financing I needed, MFW is also opening doors for Tabeetna at bazaars and exhibitions, where I get to share my experiences and inspire other women to start a business, too.”